This year through racing and training and life I’ve learned a lot about myself.  But, the biggest thing I learned was I lack grit. When I’ve said that before I’ve gotten “oh no you do not! I could never have finished a half ironman/marathon” but it isn’t even about that.  I feel an innate obligation to finish things, but not to go with everything I have.

My first true glimpse at that would be my first “fastest mile” test in June.  I pushed, sure….but at the end when I should’ve been spent, I could’ve kept going.  When I was supposed to leave it all on the table, I didn’t.  I chalked it up to usually doing distance running and “usually portioning my energy over a longer period of time.” But, at the Pink Power triathlon in August, I got to see what it really was.  My swim wasn’t great, but by the end of the bike, I was 6 minutes ahead of last year’s time (assuming my run would stay the same), and I felt great. But, in the run (where I was pacing to finish 2 minutes faster than the previous year’s run), I got to about half a mile left and thought to myself (and I am not exaggerating) “is 8 minutes faster than last year really that much better than 6 minutes?” And I walked. I had less than five minutes left of work to do (and I still felt fine, by the way) and decided I didn’t feel like it.  I was excited to have shaved 6 minutes off of last year, but simultaneously stunned at my complete complacency.  The potential was there to be even better, but I didn’t bother.

My internal regrets with how I “let myself off the hook” with that race helped shape what my goals for 2018 would be, though.  I didn’t need to keep climbing in miles and races…I needed to take a different step.  I need to work on tapping into my grit.  And to be able to do that, I have to be able to lay it all out in a mile; I need to be able to clinch my teeth and finish the race.  In 2018 (after I get my retribution and complete the Shamrock Marathon), I will only be doing short distance races.  10k and shorter runs and only sprint triathlons in an effort to work on speed and grit. 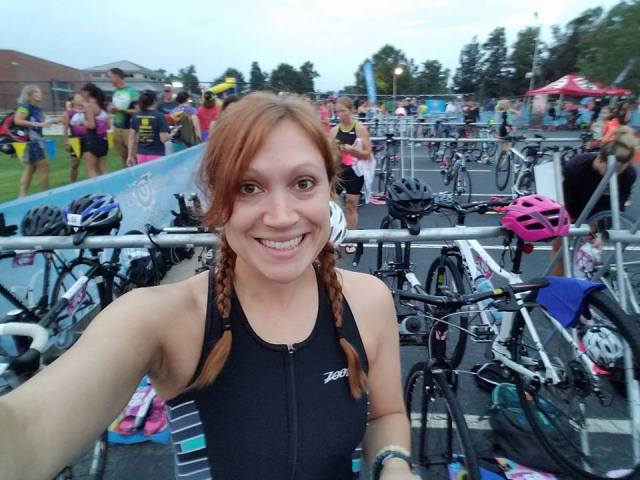 This entry was posted in running and tagged 2018, cycling, goals, running, swimming, triathlon. Bookmark the permalink.